Does Green Exist in a Vacuum?


How long will consumers accept the barrage of media addressing the Green initiatives? Will it be a passing marketing fad or is this a sustainable trend that you need to pay attention to?

Most central vacuum retailers recognize the basic green arguments of the trade but can they truly formulate a logical argument as to the true green aspects of a central vacuum? Hopefully this article will delineate many new aspects not previously considered.

There appear to be three separate thrusts of the "Green" marketing with a considerable amount of overlap between them. The first aspect would be the actual reduction of energy consumption by using a central vacuum over a conventional portable. Is less energy expended over time? Secondly, what are the true health aspects that are increased by cleaning with a central vacuum? Does this truly add to a healthy home? And third, do the manufacturers actually produce the products adopting an Environmental Management System (EMS) in their factory and are the dealers continuing this effort?

"A Consumer Electronic Association (CEA) survey of builders conducted in 2007 found more than three-fourths, 76%, of builders offered central vacuum systems to their buyers in 2007. It followed an NAHB (National Assn of Home Builders) study in 2006 that showed central vacuum systems were installed in 30% of new luxury homes and almost one-fifth of 'move up' homes."1 Sara Gutterman, CEO of Green Builder Media eNews states that the current economic climate has caused builders to replace the "predictable set of luxury upgrades" with energy saving "healthy materials to enhance indoor environmental quality…"2 At the recent National Green Building Conference in New Orleans in May it was presented that the residential green building market would reach $12 to $20 billion this year with 40% of builders thinking that green building helps them market their homes in a down market.3

This issue is not a fad that will soon pass but rather a serious opportunity for central vacuums to finally achieve their deserved position in the modern household. Even the ASTM International committee on vacuum cleaners is addressing the issue, investigating areas in which energy management standards for vacuums might emerge.4 The industry has even gained recognition in the National Green Building Standard awarding one LEED® (Leadership in Energy and Environmental Design) points toward homes containing a central vacuum system 5 (Requires 108 Points to become Platinum Certified.) and 5 points in the NAHB Green Building Standard.

Syndicated columnist James Dulley writes, "the energy-saving advantage of using a central vacuum cleaner is the fact you probably will have to vacuum less often. Since dust and dirt are captured in the central power unit located in a garage, utility room or basement, none blows through the filter and back into the room."7

First, most central vacuums have 2-3 times the cleaning power of portable vacuums. This deep down cleaning accompanied with the versatility to reach areas more quickly actually reduces operating time to clean the room. Secondly, the central vacuum evacuates all germ-laden air and dust from the room. The portable vacuum is forced to redeposit the air back into the same room environment and microscopic particles have passed through the filtration system. The user sees this in a ray of sunlight or in the accumulated dust that settles on the drapery or furniture. This requires additional cleaning time and possibly more electrical energy consumption.

Operating a central vacuum on a hot day would also be better on your utility bill than a portable vacuum as the heat-generating motor(s) is located out of the living area thus not requiring your AC unit to work as hard. Conversely it could be said that a portable vacuum could actually contribute to heating your home in the winter but this factor is quite negligible. 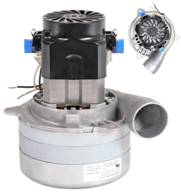 Central vacuum motor manufacturers are also developing far more efficient motors. Where the typical motor in the past would have had an efficiency rating of around 30%, they are now achieving up to 43% and working toward a target of 50%. "This transfers a greater amount of electricity into suction power and working energy rather than just heat," states Pete Pavlick of Ametek, Lamb Electric Motor division, "these motors also consume less copper, steel and aluminum"8

Most central vacuum manufacturers offer an electric powered beater brush. Check the amperage on these as most are in the 2-2.5 Amp range. One brush, Stealth, offered by MD Manufacturing has twice as large of a commutator and only requires 1.4 Amps, a far greater efficiency than the others. Companies such as HP Vacuflo and Wessel Werk offer powerbrushes that do not contain an electric motor but rather an air-powered turbine inside the brush.

Central vacuums clearly have a major advantage when it comes to the health aspect of the "green" phenomenon. According to Paula Baker-Laporte in her book Prescriptions for a Healthy House, "indoor air pollution is one of the top four environmental health risks identified by the US Environmental Protection Agency (EPA)"9 The EPA has even identified that one of the major means of reducing chronic illnesses is to "keep the house clean. House dust mites, pollens, animal dander, and other allergy-causing agents can be reduced, although not eliminated, through regular cleaning."10 They go on to warn that "allergic individuals should also leave the house while it is being vacuumed because vacuuming can actually increase airborne levels of mite allergens and other biological contaminants." They suggest the use of a central vacuum to alleviate this problem.

In Asia during the SARS (Severe Acute Respiratory Syndrome) issue of 2003 it was found that regular vacuuming was further spreading the germs. Offices, hotels, homes and other buildings had raised airborne-particle levels caused by the portable vacuums. Sri Rajah, Vice President of Nexaldes Corporation in Kuala Lumpur notes that the particles contained within the filter bag of the portable were breaking down into smaller particles even as they sat in the bag. Turning the unit on or off, bumping against furniture, and simple movement disintegrated the particles.11 As a result of this many of the major buildings of Asia have been fitted with central vacuums. It is very clear that indoor air quality actually worsens with the use of most portable vacuums. 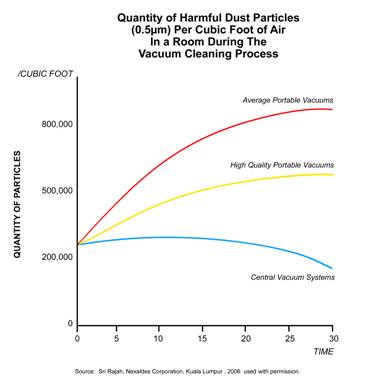 In 2002 the Division of Allergy and Immunology at the University of California, Davis, conducted a clinical study that proved a link between central vacuum systems and allergy relief. The study found that patients experienced a 40% to 61% improvement in their symptoms when they switch from using a portable vacuum to a built-in central vacuum system to clean their homes.12

In a 2007 survey by Professional Builders Magazine, indoor air quality ranked second only to energy efficiency in importance to home buyers with 83% of respondents identifying it as an important factor.13

One note of caution is stated by Dulley, "if your primary concern is removing allergens, then venting the central vacuum outdoors is an option, but not necessarily the best... it will suck much conditioned air from inside your home and this increases your utility bills."14 So he recommends central vacuums that have finer filtration systems that do not require the exhaust to be vented. Also it should be noted that venting central vacuum systems with weaker filtration systems can possibly exacerbate allergy problems if the exhaust location can cause the air to flow back into the home or if it is directed out toward a living space location.

Hopefully most central vacuum manufacturers employ eco-friendly manufacturing processes and wise stewardship principles. This should include total reclamation or recycling of all scrap steel, all cardboard products, and any wood products. According to Henrik Sundstrom, VP of group environmental and sustainability affairs of AB Electrolux, his company has implemented an EMS program on all manufacturing facilities with at least 50 employees. M.D. Manufacturing published its "Green" policy back in 2002 which even encouraged dealers to save up and return packaging materials to the factory for full recycle life. Based in environmentally sensitive California, M.D. was the first in the industry to switch to powdercoat based paint systems back in the 1980's reusing 100% of all overspray and additionally their manufacturing liquid waste output is less than one gallon per year. 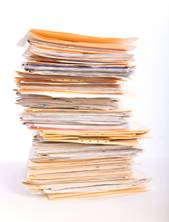 Corporate social responsibility for manufacturers as well as dealers/installers should include ethical, social, and environmental conduct assessments. This may be as simple as a commitment to recycle all paper, plastic, and metal products in the office or may involve paperless billing and statements. M.D. Manufacturing has implemented an extensive WMS (Warehouse Management System) that negates the need to use printed orders, invoices or statements for clients. VP of Operations, Brian Graves states, "this one system has literally saved us over a ton of paper output since we implemented it." The company is currently building a new facility which will contain many energy-saving features such as Solotube lights in the offices, skylights in the warehouse and even optic sensors that shut off lighting in particular areas when the lighting is not needed or areas without traffic. It is only logical to wisely consider proper usage of all God-given resources.

The evidence is overwhelming; Central vacuums consume fewer natural resources, they are clinically proven to improve health related symptoms, and energy expended in the manufacture of some central vacuums is spent wisely with a concern for the environment. Why would any consumer consider purchasing any other type of vacuum?

About the author: Grant Olewiler entered the central vacuum market in 1976 as an assembly worker at M.D. Manufacturing. He eventually formed his own central vacuum installation and service company interacting with tens of thousands of central vacuum homeowners. He returned to M.D. Manufacturing as General Manager in 1992 and holds numerous patents on central vacuum technology. He serves on ASTM committees establishing standards for central vacuums and has instructed over 100 central vacuum seminars over the past 26 years. He has written numerous published articles on the subject including a large portion of the www.builtinvacuum.com website. M.D. Manufacturing produces under the Silent Master, Modern Day, FloMaster, AirMaster, and Stealth labels. Grant can be reached for further comment at (661) 377-0081.
​