Electrically powered attachment kits include an electrified hose and vacuum brush head. There are two types of electrified hoses (right). There are Direct Connect hoses, which have little prongs that stick out on the wall-side of the hose and fit right into an inlet valve. And there are corded Pigtail hoses, which include a cord on the wall-side of the hose that users can plug into the nearest power outlet.

An electrically powered vacuum brush head has a motor that spins the brush, aiding the function of the vacuum by digging into the carpet with enough force to lift dirt from the base of the carpet. Some electric brush heads have power settings (low & high). Also, some heads like the Stealth brush have height adjustment settings for optimal use on short and tall carpets. Most modern electric heads have a microchip board that governs the RPMs and functions related to the motor and brush roller.

Because electric brushes have a motor assisting the brush spin, the brush loses less power to friction as opposed to Air Powered brushes that may stall if introduced to an increased amount of friction. Also, since an electric head isn't using the suction of the vacuum to spin the brush, more suction and air flow reaches the carpet.

Electric power heads will give your carpet that "Groomed" look that we come to expect from a vacuum cleaner. Because of the superior airflow, and the spinning brush, carpet bristles are lifted, vacuumed, and laid down in the direction that the power head is pushed. Air powered heads won't always do this because they simply don't have enough power. 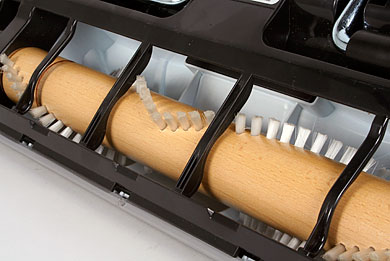 *    Edge Cleaning refers to the side of the brush with the smallest gap between the outer edge of the brush and the suction chamber.
**   Height Adjustment allows for optimum carpet grooming.
***  Neck Swivel refers to the degree the hose handle can be rotated left and right. More rotation makes for easier maneuvering and more comfort.

Air powered vacuum brushes channel the suction and air flow of a vacuum through a small tube in the brush (a smaller channel than in an electric brush). In the tube is a turbine which is forced to spin via the air flow. The turbine is responsible for spinning the brush in the head. The turbine duct is the only inlet for air in the brush, so all vacuumed particles pass through the turbine (sometimes stalling the spin). The suction of the vacuum (different from the air flow) determines how much friction the brush can withstand before it freezes. So, vacuum units with low suction (Water Lift) may not be strong enough for an Air Powered brush head. Consequently, if the air powered brush starts spinning slower for an unknown reason, it probably means your vacuum bag is full in the unit (causing less air flow). 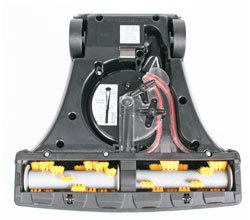 Air powered heads do a good job on hard floor and short carpers. They also do a good job at picking up dirt and small particles on these surfaces, however, watch out for medium to large sized debris, because air powered turbines are easy to clog. To decrease the friction energy on the turbine, some air powered heads have less bristles on their brush like in the TurboCat shown to the left. Instead of a steady row of bristles, notice the gaps.

Use the comparison charts on this page to review specifications for electric and air powered kits and brushes. For expert advice, give us a call at (800) 997-2278.