MD Central Vacuum products beautify and maintain the homes of famous movie stars, politicians, singers, sports heroes, corporations, and everyday people who have yet to be discovered. Although MD's products offer amenities and features unique to the industry, our products are still affordable to the average consumer concerned with a safe and clean environment.

The following list of clients have our products in their homes, and/or business: 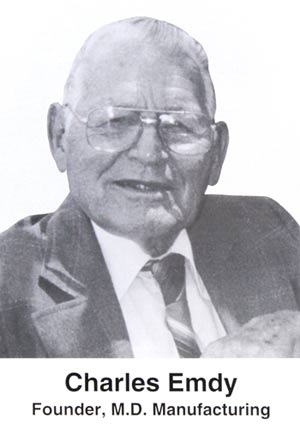 The founders of M.D. Manufacturing, Inc. have been inducted into the VACUUM CLEANER HALL OF FAME and a plaque bearing their picture and the following dedication is a part of permanent vacuum history.


Charles Emdy, founder of M.D. Manufacturing, was a visionary. Born on a farm in the middle of Texas and having only an eighth-grade education, he left to work for the Ford Motor company to build Model A's. His love for metalworking and tool making grew until he finally built the first M.D. Built-In Central Vacuum-out of wood! His streamlined manufacturing ideas, which were passed on to his son, still confound many who consider him to be a mechanical genius. Charles' passion for the industry was so deeply rooted that he continued building parts for M.D. until he was 88-years old. Humble, hardworking, and forward thinking - what more could we honor?

Charles was the driving, motivating, and influencing force behind Wayne Emdy. Charles trained his son well, passing along these values: expect to work hard for your money, never give up, and always do right ... even when others do not. "Charlie" was the tooling genius behind the smaller 2-motor built-in central vacuums; the first 3-motor systems; the most extensive, standard filtration designs; dual intake ports; and many other inventions. Although he never received any awards for his work, Charles Emdy was blessed by seeing his products in action. 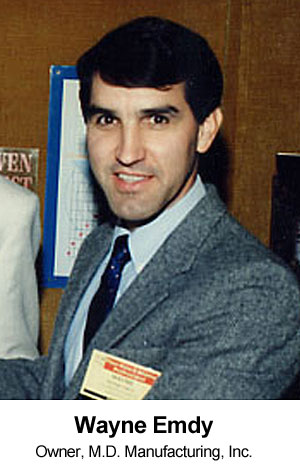 WAYNE EMDY
One word alone best describes Wayne Emdy, second generation owner and operator of M.D. Manufacturing: integrity. Until the day of his untimely death in June of 1992, when Wayne Emdy consummated a deal with a simple handshake, you knew his word was as good as gold. His uncompromising commitment to run his business with utmost integrity in order to bring glory to God left an indelible impression upon his fellow manufacturers, his dealers, his suppliers, his friends, and his employees, all of whom would concur that Wayne was a man of his word, even if it cost him time and money.

As a teenager, Wayne displayed an aptitude for business and an instinctual professionalism. He apprenticed at his father's side, and as his parents' mom-and-pop business grew, he saw the potential that existed from providing a top quality product undergirded by the integrity of his parents. In 1971, Charles Emdy, recognizing his son's potential, transferred ownership of M.D. Manufacturing to Wayne, who then went on to design and patent even better innovations, such as the first-ever high-CFM, small-motor system; the most extensive standard filtration systems; and a unique, sound-deadening system to reduce noise levels. A few of Wayne's projects that may further revolutionize the vacuum industry are still being worked on today.

Wayne Emdy was one of those rare individuals who could not only conceptualize, prototype, manufacture, and market an idea, but who had the work ethic to package and ship it out himself, if necessary. As a charter supporter of VDTA and regular instructor in the seminars, Wayne Emdy is still highly regarded not only for his pioneering spirit and innovative creations but for his integrity, humility, and honor.