An A-Z glossary of some key terms and definitions you may come across in the central vacuum industry.

A vacuum cleaner lowers air pressure inside the vacuum unit. The air around us constantly exerts a pressure of about 400 inches of water (1). Every exposed surface has the equivalent of that much water pushing on it. So, lowering the air pressure inside the vacuum unit creates a discrepancy in pressure, and causes the air to rush inward in a controlled airflow. This creates the cleaning effect.

A combination measurement of Water Lift and Air Flow is called Air Watts, which has become more standard for the central vacuum industry. Air Watts is recognized by the American Society of Testing and Materials (ASTM) as the best way to measure the actual cleaning power of a vacuum system (2).

Amperage is the strength of the electrical current, measured in amperes. This is the draw of electricity required to operate the vacuum motor. A motor that uses more electrical current does not always mean the current is being used efficiently.

Armature is the center part of the motor that rotates, transferring electricity across the motor and enabling the motor shaft to spin. A quality armature is mounted on ball bearings, and protected from incoming vacuum air that has been heated and dirtied.

This is a separate stream of air that cools the motor. It is different from the air that draws in dirt from the home. In a bypass motor, air being vacuumed does not actually flow through the electrical components of the motor. Normally these motors have a separate fan to provide cooling air to the motor.

The CFM (air flow) is measured by how much air is taken in through a round opening ranging from two inches to completely closed. If you want to vacuum through a larger opening, you would need more CFM.

In a vacuum with cyclonic filtration, the air carrying the dust and debris moves like a tornado, with the air swirling downward in a cone-shaped pattern. The vast majority of the debris separates from the air stream as air reaches the bottom of the cone, and is deposited in the dirt container. A fraction of the debris remains in the air, which is normally removed by the secondary filter or exits through the exhaust.

The fan is a combination of blades that spin, creating the airflow that produces the vacuum. There are often two or three layers of fans on each motor, called fan stages. A motor with two fans is called a two-stage motor; if it has three fans it is a three-stage motor. Each fan layer increases the water lift (sealed suction measurement), but decreases the air flow (CFM). Air driven power brushes work better with a motor with more fan stages.

HEPA stands for High Efficiency Particulate Air, used to reduce the number of contaminants in indoor air. A HEPA filter will arrest or stop 99.97% of all particles 0.3 microns or larger (3). However, they have limitations in vacuums and only a handful are truly "HEPA Certified."

There are three different Horsepower ratings. The first, "peak horsepower," is measured when you take everything off the motor that restricts it and then you put as much electricity as possible into the motor until it nearly explodes. The second rating, "input horsepower," is the maximum watts used by the motor, divided by 746 (4). A top-of-the-line portable might pull 700-800 watts or about 1 horsepower. Our SilentMaster S500r pulls a max of 1836 watts, or 2.5 horsepower. The third and truest measurement, in our opinion, is the "operating horsepower," which is the watts used at the operating orifice divided by 746. Our S500r would operate at 1770 watts with an electric power brush, thus achieving 2.37 horsepower.

Motor Speed is measured in Revolutions Per Minute (RPM), which represents the number of times a motor rotates per minute.

A collection device for dust and debris, now used by few vacuum cleaner manufacturers. Paper bags, in our opinion, are the best way to filter debris. They have a safe and healthy disposal and a very clean exhaust.

A common plastic polymer that provides excellent appearance and longevity, with good flame retardancy, at an attainable price. All of MD Manufacturing central vacuum fittings are made from virgin PVC.

Often used in high quality motors to prevent dust and debris from entering the motor bearing area. All MD motors have sealed bearings.

An electronic means of slowly starting vacuum motors to reduce initial in-rush voltage spikes. It starts the motor at a slower voltage, slowly ramping up to operation voltage. It allows the manufacturer to utilize a smaller capacity of relay, which is less expensive.

A thru-flow motor differs from a by-pass motor in the way it is cooled. The air drawn from the home flows through the motor to cool it, rather than a separate cooling fan as in the by-pass motor. Since the air from the home travels through the motor, it is imperative to have excellent filtration. Our Flo-Master and AirMaster vacuum units utilize thru-flow motors and have micro-filtration, which keeps the motor clean.

A measure of the electrical potential employed by a vacuum motor. Typically, motors require the common household current: 110 to 120 volts in North America and 240 volts in other parts of the world. Voltage is to electricity as pressure is to water; it is a measure of potential or driving force.

Water Lift is a "sealed suction" measurement to find the pure suction force of the motor. It is obtained by how many inches up a tube the vacuum motors intake can pull up, or lift, the water.

Watts measure how much electrical power the motor uses. 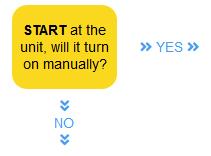 Use our troubleshooting interactive flowchart to help you resolve any central vacuum issue. 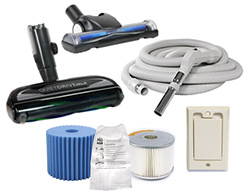 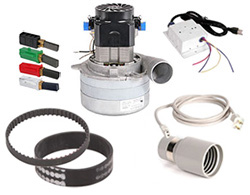